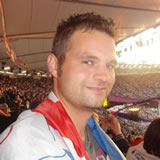 Peter has been coaching since the age of 16 and developed  his coaching skills throughout his coaching career learning from a vast  range of experienced coaches and athletes. As a former Kent champion in sprints and pole vault Peter has experience of being an athlete who competed at local, county, regional and  national level. As part of the England Athletics national coach development programme for jump Peter has learned from some of the best coaches in the world including coach to current world triple jump record holder Jonathan Edwards -Peter Stanley. Peter coaches athletes of all ages and abilities from beginners to international standard.

His main objective is to ensure all athletes receive the best possible coaching for them as an individual and have fun. In 2013 Peter was awarded  the England Athletics South East Region Services to Coaching Award for his development of disability athletics in Kent. Peter is the Senior Southern Athletics League Team Manager.